The Bridges of Rome

There is a really unique way to visit Rome enjoying the beauties and views at any time of day and night, especially in the beautiful season.

Do you want to know how?

Just admire the city from  the many bridges  that cross and crisscross the blond Tiber, soul and heart of the capital. Although the close relationship between the river and Rome is no longer the one that has been,  hidden from the wide nineteenth-century banks, it is possible to see unique corners and perspectives from these unusual points of view, impossible not  to immortalize it in a picture!

Here is a special TOP-10 to discover the most beautiful bridges in Rome! 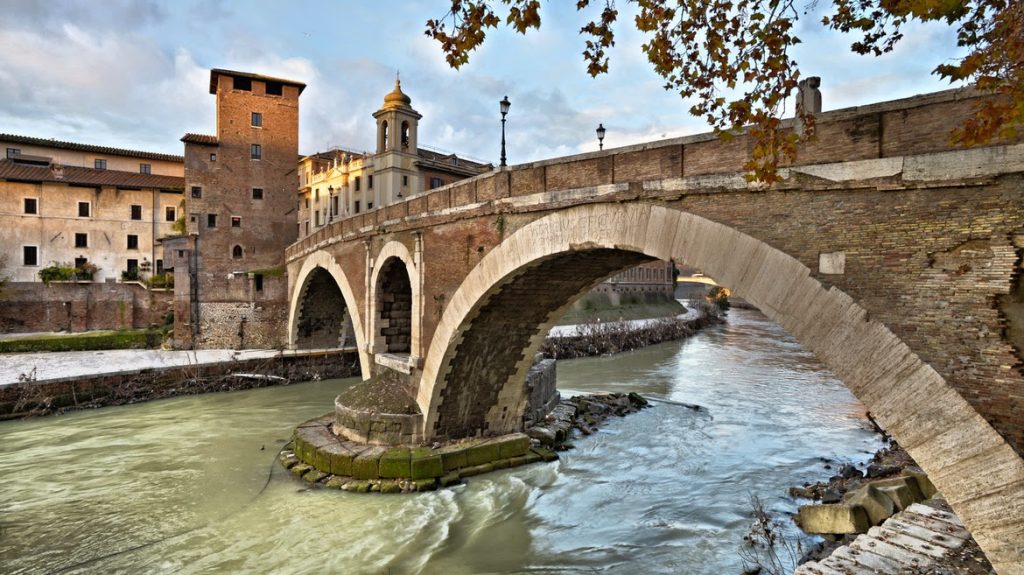 The oldest bridge in Rome seems to have been the Sublicio, now vanished – the present one is modern – and had to be a little further downstream of Tiberina Island. Today, however, the bridge used between Isola Tiberina and the Ghetto is the Ponte Fabricio, whose name is due to the builder, Lucio Fabricio, who made it in the 62th c. Also called Jewish Bridge or Four Heads bridge, for the presence of two herms four-sided, representing, some say, the god Janus, or, according to others, the four architects who restored the bridge at the time of the Popes, punished with death for their constant quarrels about the project

9. THE BRIGDE OF THE OTHER SHORE: PONTE CESTIO 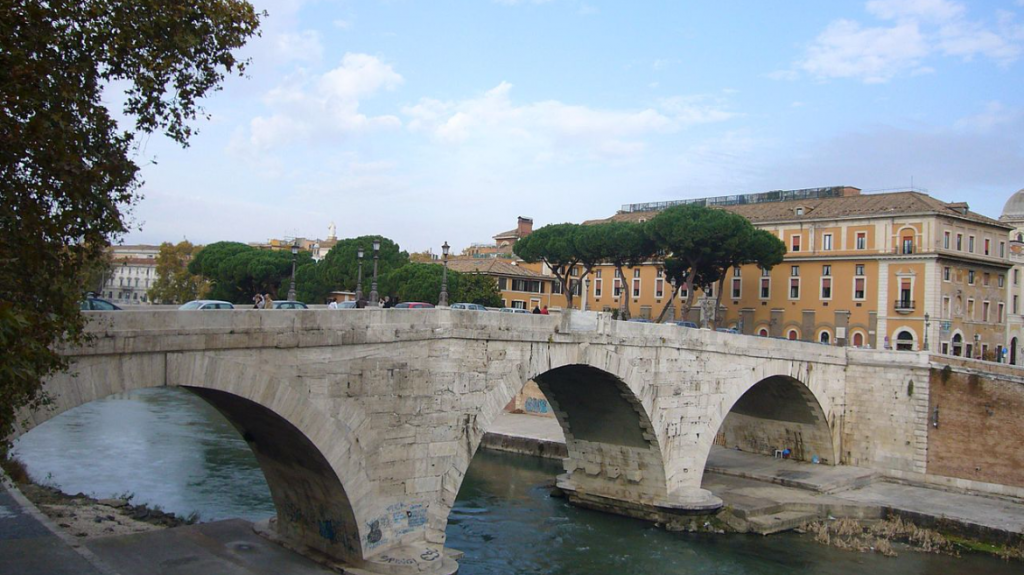 Like Fabricio, Ponte Cestio was built in Roman times, to connect the Tiberina Island to Trastevere. Its builder was probably Cestius, the same famous person who had it built as a personal tomb the famous pyramid of Rome. Unfortunately over the centuries the bridge was destroyed and rebuilt many times, the latter at the end of the nineteenth century. It is also said Ponte San Bartolomeo for the presence of the Basilica on the Island or Ponte Ferrato: in fact until a couple of centuries ago, there were numerous chains that served to anchor the mills on the river. Even these have disappeared today.

8. AND 7. THE BROKEN BRIGDE (PONTE ROTTO) AND ITS “ENGLISH BRIGDE” 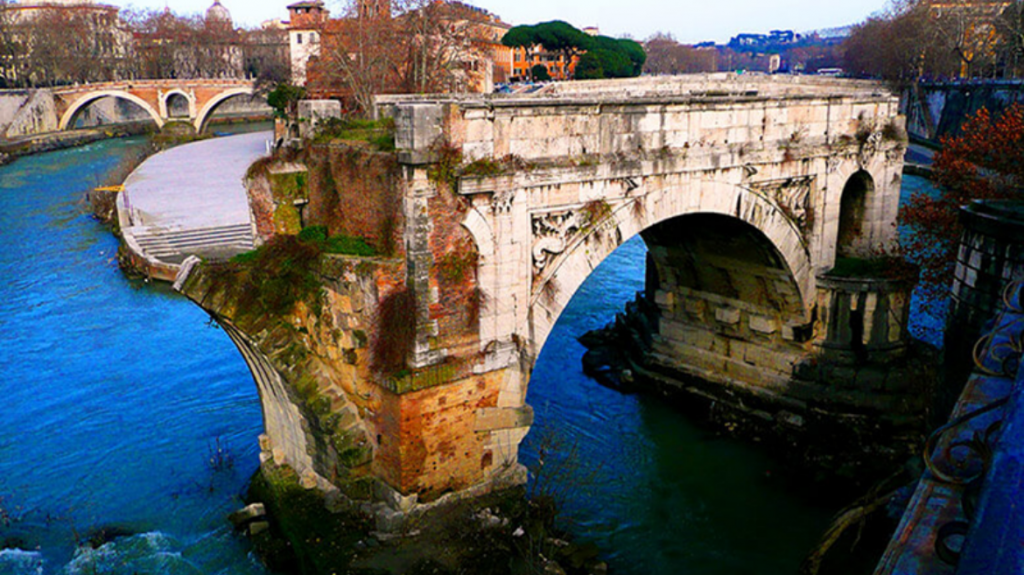 Although no longer viable, the so-called Broken Bridge, and that is all that remains of Emilio Bridge, placed in front of the Isola Tiberina  must be included in our TOP-10. It is probably one of the oldest bridges in Rome, dating back to the 3rd century BC. After numerous renovations and restorations, however, it was abandoned after the great flood of 1598, which demolished three arches. At the end of the nineteenth century, when the banks of the Tiber were built, there was a new bridge, the Palatine Bridge, also known as the Bridge to the English for the direction of the automobile for us inverted!

6. THE BRIGDE OF PROSTITUTE: PONTE SISTO 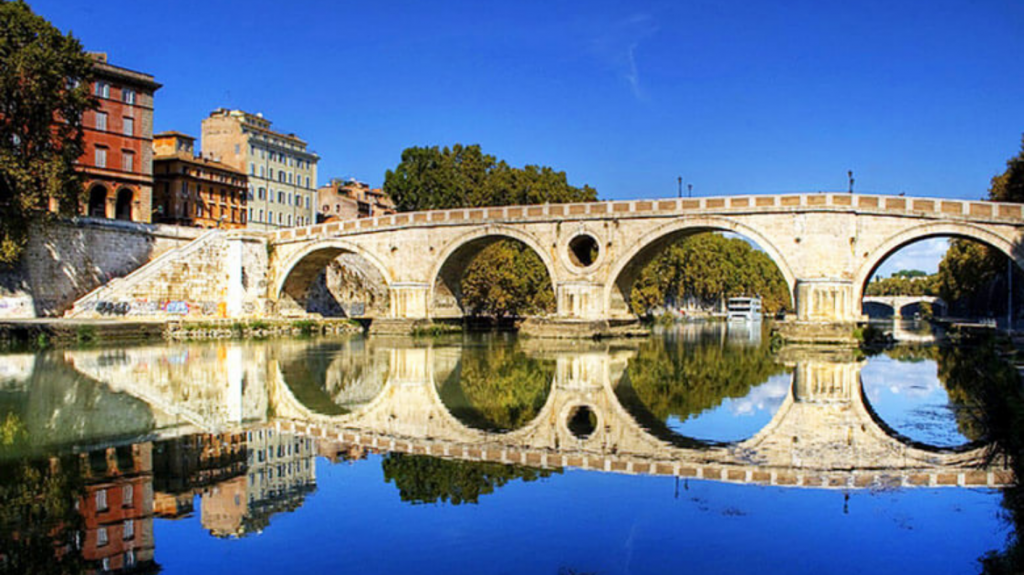 In the place of the Roman bridge built, it seems, from Agrippa, towards the end of 1400 was realized Ponte Sisto, so called by the name of the Pope commissioner Sisto IV Della Rovere, the same as the Sistine Chapel in the Vatican! The bridge, as it is today, connects the heart of Rome with the Trastevere area, a very spicy curiosity is given by the funding for its restoration that seems to have been paid thanks to the fees paid to the Curia directly by prostitutes of Rome!

5. THE BRIGDE OF ANGELS…OR DEMONS? 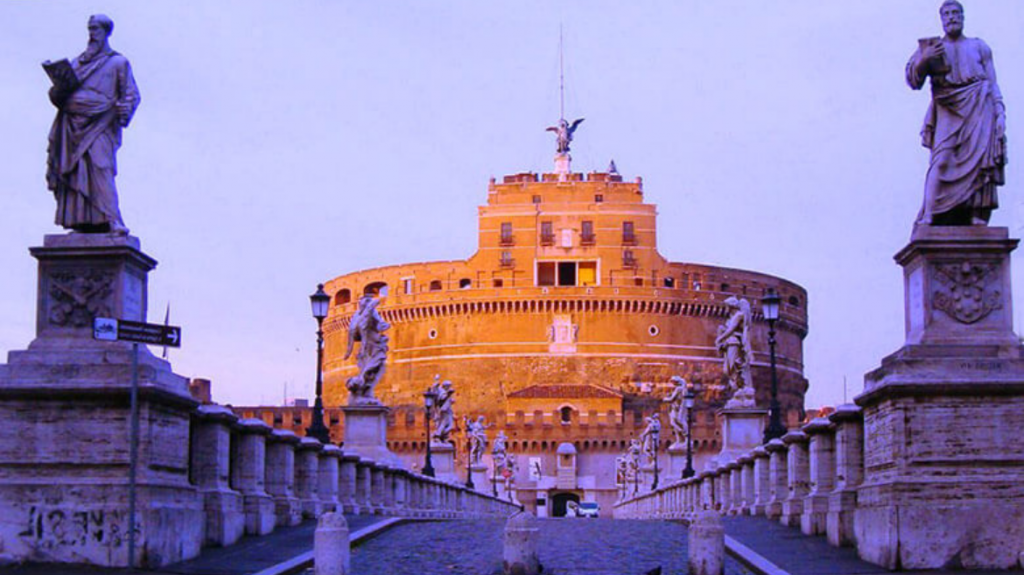 One of the most famous places in Rome is, of course, Ponte Sant’Angelo, which leads straight to the Castle. From Roman times, it was realized by Emperor Hadrian in the 2nd century to connect the city to its imposing Mausoleum and as this, it was transformed into successive centuries. In fact, when the Castle, from a simple military fortress, became a luxurious papal residence,  the bridge was renovated, in the seventeenth century, with the addition of the famous angels bearing in their hands the marks of Christ’s passion. At the beginning of the bridge are the two great statues of the patrons of Rome, St. Peter and St. Paul.

This bridge is also sadly known for the blood facts that made it a protagonist, as it was right in the vicinity  the square  where the death sentences were executed. It is no coincidence that this is still one of the places with the highest concentration of spirits and ghosts of Rome! 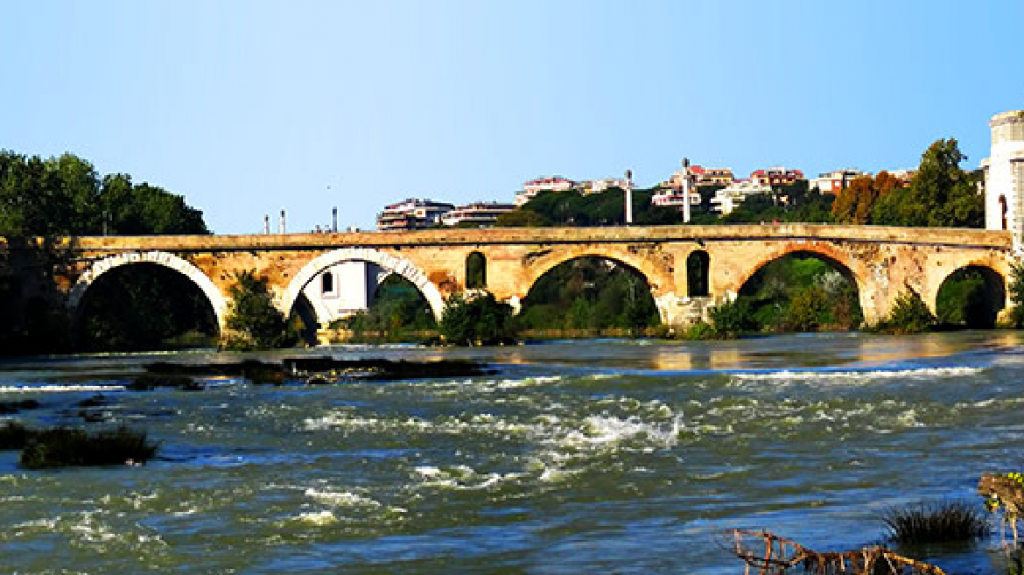 Ponte Milvio (or Soaking Bridge) is a bridge that connects Cardinal Consalvi square to Ponte Milvio square in Rome, in the Flaminio, Parioli, Vittoria and Tor di Quinto districts. One of the oldest bridges in Rome became famous for the tremendous battle of Ponte Milvio, on its banks in 312, which saw the emperors Constantine and Massenzio opposed. It was built where the river penetrated from the north to the ancient city of Rome: today the urbanized territory extends for many kilometers beyond. It was built along the route of the Flaminia and Cassia streets, as a necessary step to head north, and will also flowed into the streets Clodia and Veientana. The Romans call it popularly  Mollo (soaking) bridge because of its peculiarity: when the Tiber is full it is the first bridge to be submerge.

3. THE BRIGDE OF RECORD: PONTE RISORGIMENTO 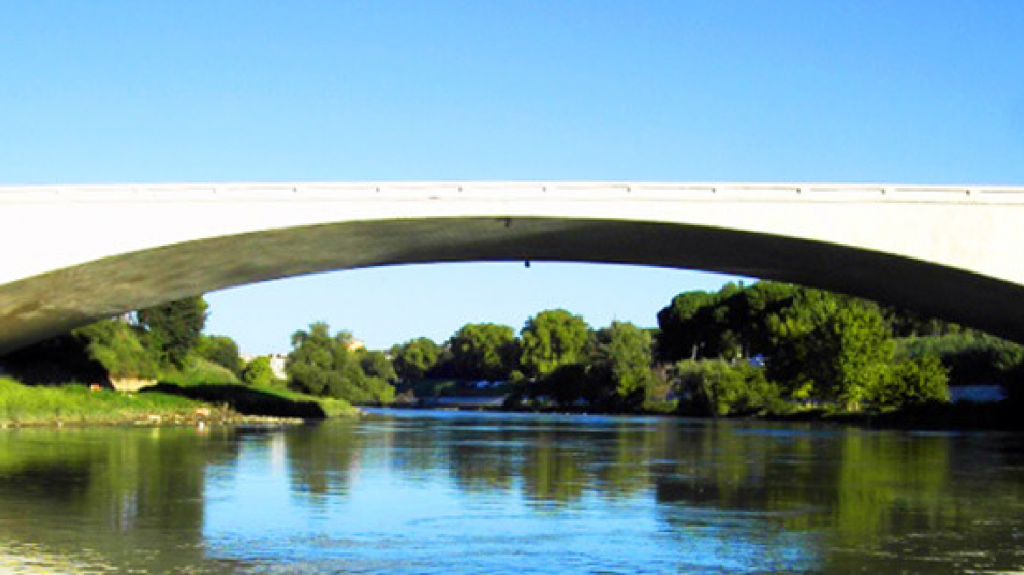 Ponte del Risorgimento (or more simply the Risorgimento Bridge) is a bridge that connects Piazzale delle Belle Arti to Piazza Monte Grappa, in Rome, in the Flaminio and Vittoria districts. It is one of the first works in reinforced concrete executed in Italy and its construction gained international prominence for his boldness in fact its light is over 100 meters, at the time of making the widest completed the world with the new technology. In the middle of the bridge, on the two parapets, there are two inscriptions: “It was inaugurated on May 11, 1911 in the fiftieth anniversary of the proclamation of Rome Capital of Italy, from the People’s Administration to the Italian Risorgimento” on one side and “Concrete Bridge Armed with a single arc of 100 meters of 10-meter-high rope, built with Hennebique system by the Porcheddu Company Ing. GA ” on the other side. 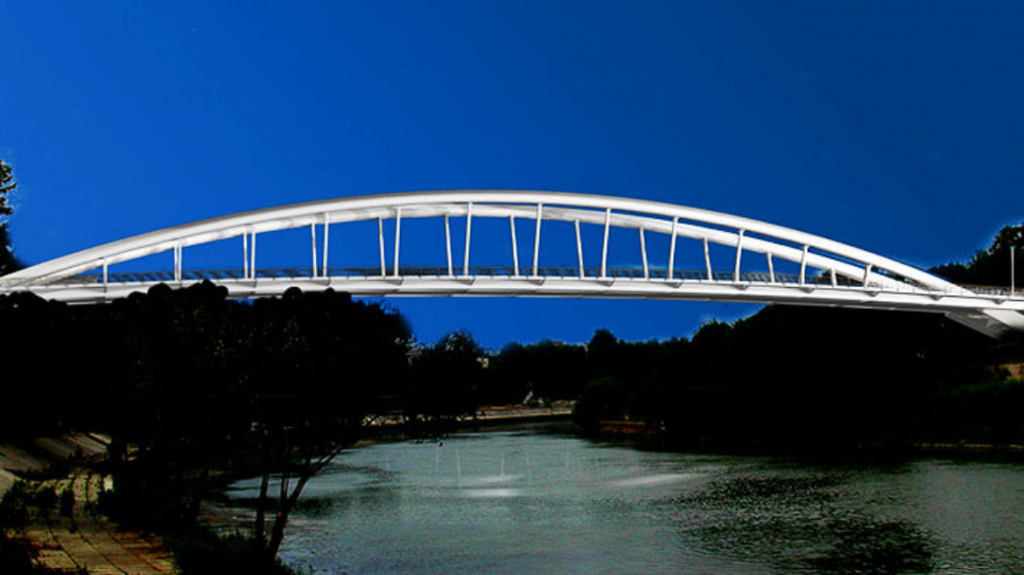 The Bridge of Music “Armando Trovajoli” is one of the last bridges to be realized in the city: it was inaugurated in 2011. Its modern design in steel and reinforced concrete gives the work an extraordinary lightness, accentuated by the music background that can be hear walking on it. It is no coincidence that this bridge, with the extraordinary Auditorium Parco della Musica its been designed by Renzo Piano! 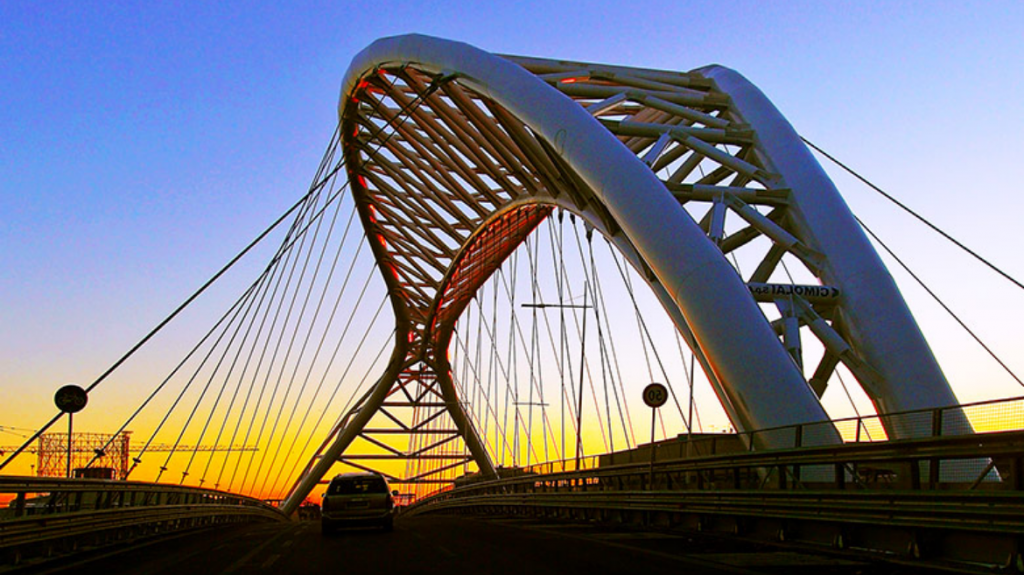 The Settimia Spizzichini Bridge (the only surviving among the women of the Roman ghetto deported to Auschwitz) was inaugurated in 2011 and is located in the Ostiense area. It’s not a bridge over the Tiber like the previous but an overpass over the railway.. A complicated game of steel arches, beams, and ropes make it really unique: an intricate spatial play of a white candy stays in the heart of the former industrial suburbs of Rome, at night it is lit by LED lights that color it always with different colors!