Rome is not only St. Peter’s and the Colosseum!

For those wishing to know the “mysteries” of this city we propose a very special MAGIC itinerary : 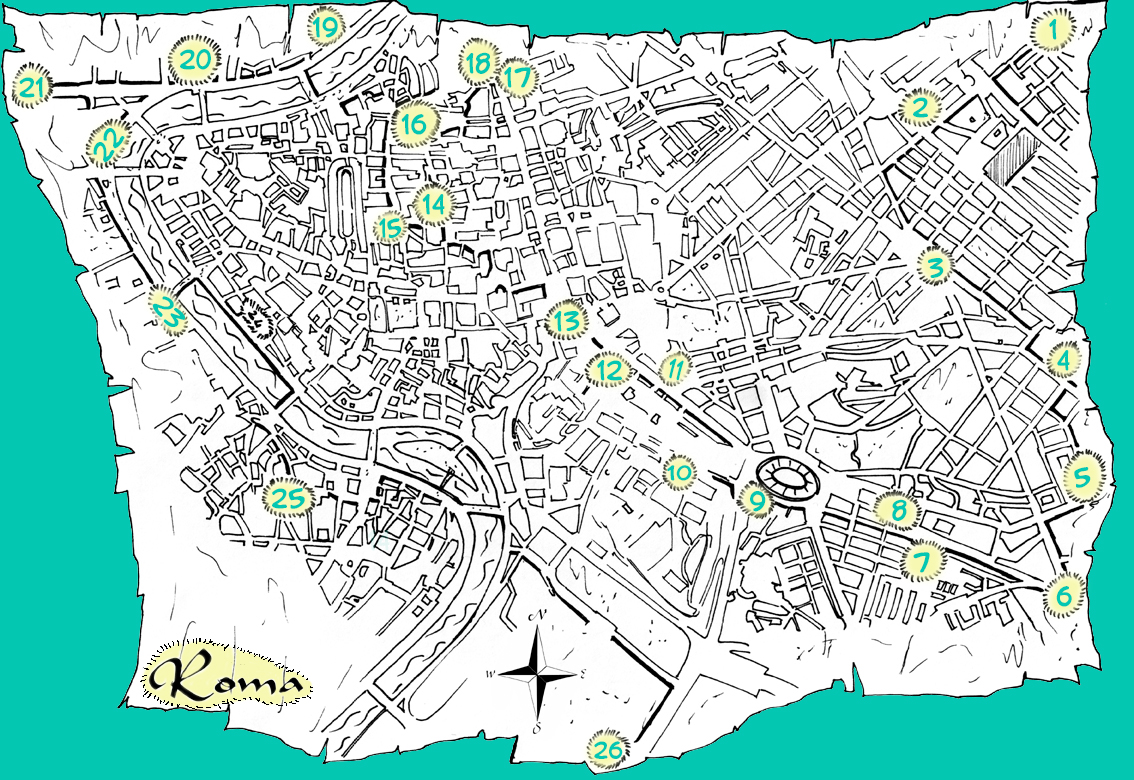 1. Museum of the History of Medicine: at the University La Sapienza, University Avenue 34 / A. section IX we can admire the reconstruction of a small study alchemy of the past.

2. Santa Maria degli Angeli, Via Cernaia, 9: the church is located a few steps from Roma Termini Central Station. Inside the same we find an astronomical meridian.

3. Basilica of Santa Maria Maggiore, located in the square: this is a magic square of Sator.

4. Magic gate: Piazza Vittorio Emanuele II gardens: on it are the alchemical symbols which, if translated, would disclose the secret of the Philosopher’s Stone.

5. Santa Croce in Gerusalemme, in the square: in front of this church Sylvester II died in 1003, the “pope magician.”

6. St. John Lateran, in the square: in this church still stands today the tomb of Pope Sylvester II.

7. Basilica of Ss. Quattro Coronati: is located along the road connecting the Coliseum to the Piazza San Giovanni in Laterano. In the past it was a place of Masonic initiations.

8. Basilica of San Clemente, in the square: in the basement of the church is preserved mithraea one of the most beautiful in Rome and Italy. Also important are those found in the Palazzo Barberini, under the Church of Santa Prisca and the one that was connected to the Circus Maximus, Piazza Bocca della Verita 16 / A.

9. The Flavian Amphitheater: better known as the Colosseum: famous throughout the world, is one of the seven wonders of the modern world, selected in Lisbon July 7, 2007.

10. Arch of Titus: on the northern slopes of the Palatine are the arch and on it a sculptural representation of Tito, back from Jerusalem, as it enters victorious in Rome preceded by treasures gathered in Jerusalem. We note, among other things, a Jewish menorah.

11. Via dei Fori Imperiali: south-east of the Forum of Augustus are the remains of the Temple of Peace, where the Romans kept the treasures collected during their foreign campaigns. Here, it may also come the Ark of the Covenant after the conquest of Jerusalem by Titus in Rome, in 71 A.D. Nearby is the area of ​​the Roman Forum, which is adjacent to the Palatine, the Arch of Constantine and the Flavian Amphitheatre, better known as the Coliseum.

12. Capitoline Museums, Piazza del Campidoglio, 1: within the building contains the world unique works, wonderful, dating back to the Roman and greek period.

13. The Victorian and the Altar of the Fatherland: is a Masonic monument inspired by the ancient Altar of Pergamon. It is located near the Trajan’s Column.

14. Pantheon, Piazza della Rotonda: born to be a pagan temple was dedicated to all gods. It too is a beloved symbol to the Masons.

15. Church of St. Ives, Corso Rinascimento 40: an affinity with the Church of the Magdalene in Venice. Both have an internal hexagonal plant; both are written “Wisdom built a house.” It is another philosopher’s dwelling.

16. Campus Martius: according to legend, in the basement there would be the place discovered by Sylvester II, full of treasures and wonders.

17. San Silvestro in Capite, in the square: among the relics in the church, there is also the head of St. John the Baptist.

18. Church of San Lorenzo in Lucina: Via in Lucina, 16a a statue, holding a cup in his left hand. It may be a reference to the Grail?

19. Museum of the Souls in Purgatory, the Church of the Sacred Heart of Suffrage: Lungotevere Prati 12, Here are some interesting evidence of the existence of the Underworld are collected.

20. Castel Sant’Angelo, Piazza Adriana: here lived the last years of his life Francesco Giuseppe Borri, as well as other alchemists and magicians, imprisoned by the Church.

21. St. Peter’s Basilica: in the basement of the Basilica, the center of Christianity, is preserved the body of the saint, founder of the Church.

22. National Historical Museum Sanitary Art, Lungotevere in Sassia 3: here we find a reproduction of an alchemical laboratory of the sixteenth century.

23. Palazzo Corsini, Via Lungara, 10: Also in this building worked alchemists. Here it was, in the past, another small study of alchemy.

24. Palazzo Falconieri, via Giulia, 1: presents within its walls a rich hermetic symbolism.

25. Basilica of Santa Maria in Trastevere: here we find the symbol of the labyrinth.

26. Pyramid Cestia, Piazzale Ostiense: incorporated into the Aurelian walls, dates back to the first century BC.

27. Palazzo Giustiniani, Via di San Pancrazio, 8: is the Roman headquarters of the Grand Orient of Italy.